A Bridge to Somewhere (Else)

A Bridge to Somewhere (Else) 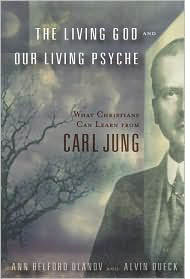 A Review of Ann Belford Ulanov and Alvin Dueck, The Living God and Our Living Psyche: What Christians Can Learn From Carl Jung, William B. Eerdmans, 2008.

I’ve been reading “bridge” books lately, ones that offer a connection between Christianity and some secular domain.  In a recent issue of The Global Spiral I reviewed a long letter that Christian psychologist David Myers wrote to skeptics and atheists.  Here I reflect on The Living God and Our Living Psyche, a book in which psychoanalyst Ann Belford Ulanov tells her fellow Christians neither to fear the work of Carl Jung nor to dismiss it as out of date.

Ulanov has been at the heart of that dialogue for forty years now.  At this point her integration of sides is so complete that she speaks with one voice, not two, the bridge consisting of her very person.  It is a bridge to somewhere, following a distinct spiritual path.

Dueck, on the other hand, is well aware that sides still exist, that tensions do as well.  To allay the concerns of evangelicals, he observes that Ulanov neither “Jungianizes” Christianity nor “fully baptizes” Jung.  She does not reduce God to subjective experience, she does not reduce Jesus to an archetype, she does not locate evil as well as good in God—all of which Jung does or comes close to doing.  Instead, she asks Christians to live their lives within their tradition “while utilizing Jung’s insights along the way.”

Jung’s insights were into myth, symbol, and ritual—into imagery, conscious and unconscious, and that is Ulanov’s path.  Images, she says, are how “we differently apprehend God: some of us visually, others of us through bodily sensations, textures, smells, sounds.”  Images “open us up and bring with them a dimension of reality that transcends us. . . . They impart to us the gift of divine presence.”  Imagery does what no creed can.

Yet Christians fear imagery, perhaps because it has a mind of its own.  A woman dreams of Fred Astaire dancing with joy and shouting out, “Where is God?”  She yells back, “In your feet!”  A man whose conscious God is found in the gospel of John finds an unconscious counterpart in a dream: there he bows before a giant pig.  Another man’s God has a cleft hand from which electric energy hisses.  Such images are not restricted to dreams.  One of Ulanov’s clients found deep release when he saw a mosaic of Christ with his toes curled over the world.  The curled toes were the key.

These are examples of personal images—messages, as Ulanov sees them, from the living God to the living psyche.  They are no less than Scripture, and just as much in need of interpretation.  In the case of one: put joy in your life.  In the case of another: explore your feelings about a mother goddess, about the awesome power of reproduction.

There is a second source of myth, symbol, and ritual, a collective source.  “We receive pictures fashioned by centuries of other human psyches, canonized in Scripture and in worshipping traditions.”  God as rock, refuge, feeder, calmer of the seas.  The story of the Fall, the Virgin Birth, the God-Man.  These are “official” images, “objective” ones.  Without them Christianity would be gasping for water.  We would say its prayers and recite its doctrines but have no life.  Even worse, “our faith [could] become a weapon of attack against self and others, particularly our children.”

On Ulanov’s path you drink from both sources.  You engage the personal and the collective.  You find a “space” between the two.  “The rough edges of idiosyncratic, even neurotic God-images can be rubbed right in exchange with images fashioned by the historic church community.”  At some point the space opens further, so you ask what it “wants” (it’s hard to imagine doing this without a therapist).  The answer will feel like grace.  It will feel like the voice of God calling you onward.

Onward, that is, until images themselves are no longer useful, until their very success “wears them out.”  Symbols are finite, after all, and mystery is infinite.  At the end of Ulanov’s path lies the unknowing of the mystics.  No words come in this place, nor does any imagery.  There is only “unmediated Presence,” “animating Spirit,” the “living God.”  Ulanov’s bridge leads to God as “a psychic fact of immediate experience.”  The words are Carl Jung’s.

While Ulanov’s bridge can take Christians to Jung, it can take them somewhere else as well: to what Metanexus calls “the whole story of the whole cosmos for the whole person.”  Actually, it can lead people of many faiths to this place, to a new Story of Everything.

When eco-historian Thomas Berry called for such a story thirty years ago, he said its organizing structure would have to be the new scientific cosmology.  More to the point, he said that the new story would have to include the old ones, especially those of a religious nature.  This past summer, in a paper on meta-narratives, William Grassie reiterated both points for the Metanexus conference in Madrid.

How is this to happen?  How is a scientific story of evolution and emergence, covering 13.7 billion years, going to hold stories of a Divine Creation, of a Fall and a Flood, of a Redemption, to take just a few from the Christian tradition?  How will Christians even get to the new story?  How will they embed their stories there?

It will take a bridge, and a narrow one at that.  Something will change in the crossing.

When they first step on the bridge, Christians will be telling their stories in “day language,” to use the analogy of Michael Dowd.  But if they make it to the other side, they will be speaking the “language of the night.”  Their stories will look the same, sound the same, have the same characters and plot.  But the environment will be different, and the stories will be understood in a radically different way.  Day language is the language of objective fact, publicly measured and verified.  Night language is Jung’s and Ulanov’s specialty: myth, metaphor, subjective meaning.  On one side of the bridge, for example, the story of the Fall will be understood as an historical event.  On the other, it will be a symbol, capturing the experience of waking up to instincts shaped by millennia of evolution.

Going from day to night is an enormous change, which may prove unacceptable to many Christians.  The fears Ulanov has encountered will be there, especially that of reductionism.  Crossing the bridge strips your stories of authority.  They seem to become just stories, and your creed just imagination.

And here is where Ulanov’s experience may prove invaluable.  Where she says “image” we can say “story,” a story being a sequence of images.  Then we can carry over her message that we are to engage a tradition’s stories as if they were messages from the living God.  But we have to let them be stories.  Stripped of authority, stories open us up to life, and in this role they are hardly just stories.  They are nothing less than stories.  There is a presence in the night that is absent during the day.

Ulanov’s insight about the end of the path is also relevant.  As engrained as images and stories are in our thinking, as successful as particular ones have been, there comes a point where they “wear out.”  Words are indeed finite and mystery infinite.  Beyond any theory, creed, or argument lies unknowing.  No image can help there.  No narrative can either, no matter what its size, no matter what its scope, even if it’s the “whole” story.  All we can do in this place, in the spirit of Ann Belford Ulanov, is let the darkness come and listen to Silence.