Stu Jenks will be exhibiting works from his Circle, Hoops & Spirals and Sacred Spaces series at the 2009 Metanexus Conference, July 18-21 in Phoenix, AZ. 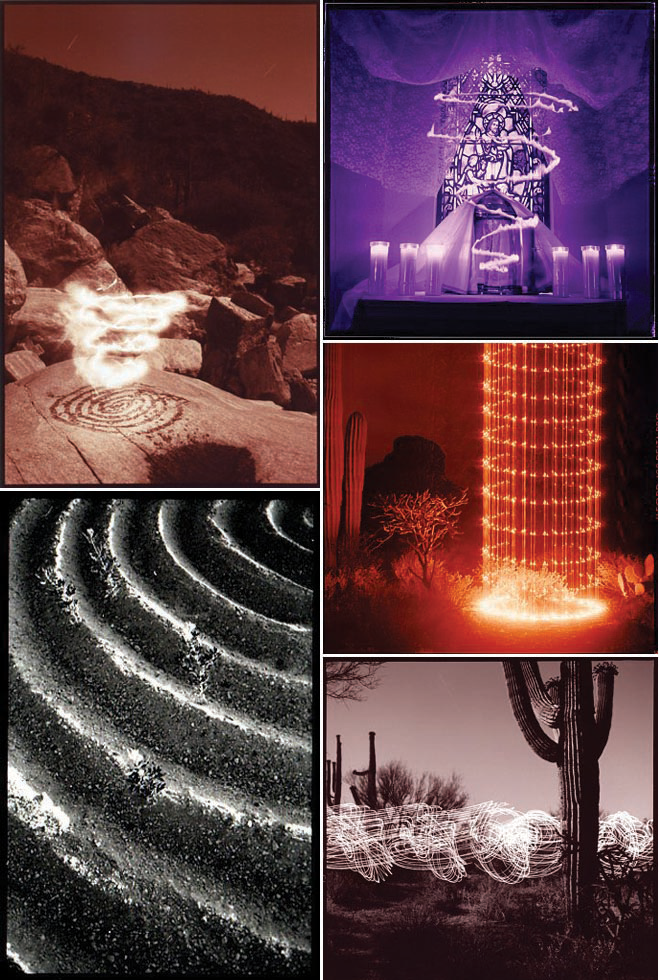 From Circle Stories, by Stu Jenks 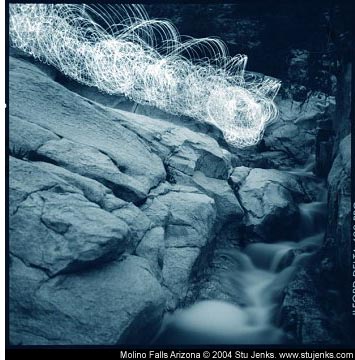 Now who’s that, I think?

I’ve just parked the Pathfinder in a space near the entrance of the Molino Basin Campground. Close to the restroom, not in the campground. It’s a spring, partly cloudy full moon night. It’s around 9:00 pm, and I’m here to shoot. But who is this guy?

A white haired man in his 60s has driven his pickup to this, the upper parking lot of Molino Basin, and is now walking toward me and my truck. I bet he’s the campground host.

He laughs sarcastically. A bit of a snort. He shines his Maglite in my face briefly.

“Don’t think so.” Get the fucking light out of my eyes I’m thinking, but I don’t say it.

“I’m just up here to shoot photographs at night in the moonlight,” I continue.

“You’re up here shooting photographs?” His voice incredulous now. I’m starting to get pissed. No laws against hiking at night nor parking in this lot.

“Why are you taking pictures at night?” he asks.

Without even blinking an eye, without any thought at all, I say, “It’s what I do.”

“It’s what I do.” I reach for my wallet to pull out a business card. “This is what I do,” handing him one of my cards. “I shoot photographs at night.”

I’m really irritated now. I don’t say anymore. I just let the silence hang. Your turn, old man. He eyes my card using his flashlight and suddenly the tone of his voice becomes nicer. Not really friendly, but less confrontational.

“So you take pictures, eh? Well, I was just coming up here to see who you are. We get all kinds of people, kids mostly. I had to clean up a bunch of condoms couple nights ago. It’s really getting to be a problem.”

“Really? That’s too bad.”  I’m faking compassion for his prophylactic problems. Frankly, I’m just trying to keep my own powder dry and not go off on him.

I decide to volunteer my plans for tonight to him. Maybe it’ll cut this short. The Full Moon pops in and out of the clouds.

“Well, I got to getting going. I’m going up toward Molino Falls for a bit. I appreciate you coming by and checking on things.” I don’t appreciate it, but I say it anyway.

“Thanks. Hope you have a quiet night.” That I do want for both of us.

“Yea, me too,” he says, walking back to his truck.

He probably ain’t such a bad guy. Most likely a widower. Takes his job as campground host very seriously. Had too many encounters with stoned and drunk college kids this spring. Lonely too. And I’m guessing I’m the first nocturnal photographer he has come across in his life. I watch him drive his pickup back into the Live Oaks of the campground proper. I then pop the rear hatch and take out my tripod and my hula hoop with its hundred lights. The hoop would freak him out, I think. That’s for sure.

I sling the hoop like a bandoleer across my shoulder, grab the tripod and the Rollei, lock the truck and go. All quiet. I cross the road and get on the trail that heads up toward Molino Falls.

The water is still running. I was up here just a week ago in the day time and was blown away by the amount of water coming down from the falls. A little spring rain, added to the winter snow thaw, plus much of the land is devoid of topsoil and ground cover from the Aspen Fire, adds up to a lot of runoff. A lot of water. I even stepped in some quicksand which was funny because I just went up to my knee with one leg. If both legs had gone in the quicksand, it wouldn’t have been quite so much fun. I plan on staying on hard rock this evening.

The moon is playing Peekaboo in the clouds. Mostly Boo. It isn’t peaking out much. I feel a bit inadequate, for last night the skies were clear, but I didn’t go out. The day job tires me out more now that I’m getting older. I’m not that old, but I’m feeling it. I used to have endless stamina. Now after shooting late into the night, getting up and going to the day job about kills me. I just want to stay in bed. I’ve always been able to fall asleep quickly but now, almost as soon as I’m horizontal on the futon sofa in my living room, I’m out. And hiking up this not-too-steep trail tonight isn’t hard, but I do have to build up some emotional and physical momentum to get up the hill.

This area was hit by the Aspen Fire, but it was hit and miss. Mostly miss. It was farther up the mountain that got nuked. Here, the fire was on its last legs, but I still see silhouetted in the night, the occasional black skeleton of an old Mesquite tree, or the scarred globe of a Yucca stump at my feet.

After walking beside the stream for a while, I cross the stream and head up Molino Canyon. I’m happy the water hasn’t dropped much from a week ago. It’s still roaring through the granite boulders. If you come here in a couple of months, you’ll find Molino Canyon dry. Not tonight.

I climb up the west side of the canyon, first steep and then it levels off, as the trail reunites with the stream bed. The roar gets louder as I approach the Falls. By big time standards, I guess they are pretty unimpressive. Maybe the biggest fall is a thirty foot drop, with smaller ten footers. No pools to swim in. They’ve been filled in with sand and silt from the big runoff last year after the Fire. But to desert dwellers, this is a huge deal. Wet. Clean to drink. A lovely smell.

The rocks are slick here and there with spring water runoff and splash from the stream. Careful, Stu. Falling to your death may be a romantic way for others to see you die, but I’d just as soon die in my sleep when I’m 80, thank you very much.

I feel good. The hoop is light on my shoulder, the tripod is steady in my hand. I’m still a little worried about the Peekaboo Moon, but I’ll make do as best I can.

I check a few angles but find the one I like pretty quickly. Set up. Focus. Try a few trial runs with the hoop. It’s not the biggest hoop, not the smallest hoop, but one in the middle. Just right, like the three bears.

I imagine myself a bit as a bear as I descend down the slick rock to the rushing stream’s edge, swinging the lit hoop, stopping at the water as if I’m fishing with a paw for salmon. I then retreat back up the rock. This is feeling good, but I have so little Moon. The Full Moon is behind the clouds, yet I still have a lot of light. A soft light. No shadows. Like a 150 watt bulb from a light box with white muslin over the front. This might work. This might be interesting, being soft.

I open the shutter, become the bear and then dance out of the frame, I lay on a rock slope near the stream. Breathe. Listen to the water. Go into that in between place, that separates sleep from awake. This side and the other. Breathe.

Time passes yet I’m not asleep. And I have no idea how long it’s been. Ten minutes. A half hour. I consult my gut on if I should close the shutter. It says yes.

On exposure three, I’m doing the long time exposure I think more for the opportunity to enter a non-ordinary state of consciousness than I am to make a good photograph. No shame in that, I reckon.

I breathe again, listen again to the stream, drop again into that place between worlds. And I feel no separation. Between me and the Rock. Me and the stream. Me and the old man a mile below me.