By Emanuel Paparella on January 8, 2009 in Essay 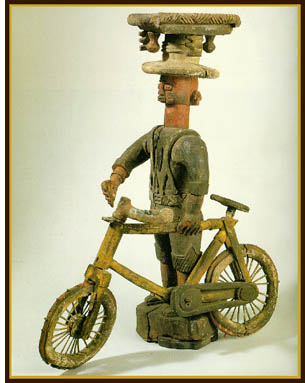 “…the place to look for hope is not just to the postcolonial novel—which has struggled to achieve the insights of Ouologuem or Midimbe—but to all-consuming vision of this less-anxious creativity. It matters little who it was made for; what we should learn from is the imagination that produced it. Man with a Bicycle is produced by someone who does not care that the bicycle is the white man’s invention—it is not there to be Other or the Yoruba Self; it is there because someone cared for its solidity; it is there because it will take us further than our feet will take us; it is there because machines are now as African as novelists—and as fabricated as the kingdom of Nakem.”

—Kuame Anthony Appiah (from In my Father’s House)

Be that is it may, it is well known that Derrida’s most rigorous criticism of the philosophy of art in the West is the fact that, beginning with Plato, it has focused primarily on the Western tradition. The Ghanian Kwame Anthony Appiah takes a hard look at such a phenomenon in his book, In my Father’s House. Very much like Jegede, he is concerned with the way the Western artworld views African art.

Appiah begins his critique by examining the process by which pieces were chosen for the 1987 exhibit, Perspective Angles on African Art. He shows that the items selected were included not just for aesthetic reasons but for economic reasons as well. For Appiah, this means that the artworld in the West far from operating on purely aesthetic principles makes judgments on art based on market considerations too. This is the dirty little secret of Western art with its pretensions of universalism and art for art’s sake.

Appiah focuses on one particular work in the show, Yoruba Man with a Bicycle, which the African-American novelist and critic James Baldwin also noted precisely because it was not an example of primitivism, the kind of African art which usually attracts Western attention. This piece is neo-traditional, produced for sale on the international art market. Appiah interprets the work within the context of postmodernism which rejects any claim to exclusivity and universality.

Modernists had previously argued for universal criteria to judge whether something is a work of art. Objects that failed to meet those criteria are not works of art, no matter the culture in which they originate. In part, African art was discovered through the modernist assessment that it possesses the sort of “significant form” found in Western modernist works. But this is exactly what the post-modernist rejects. It rejects the assumed existence of universal criteria. The post-modern theorist coins terms derived from Derrida’s deconstructionist’s school; terms such as “Eurocentric,” “phallocentric,” “logocentric,” etc, and with them he challenges the modernist to defend claims to standards untouched by history and culture. Undoubtedly, Appiah sides with the post-modernists.

Appiah challenges the modernist tradition by undermining the important concept of opposition between self and other. He does this by analyzing Yoruba Man with a Bicycle. Here we cannot see the work as simply the product of a radically different mentality and culture. This is due to its hybrid character: the presence of the bicycle in the work which makes it a pastiche of African and Western elements. But for the artist, both the traditional aspects of his culture and those he appropriates from the West are simply vehicles for his creativity. In the artist’s imagination Africa and the West are not others to each other.

So, Appiah’s reflections on this sculpture imply that in our efforts to understand what art is, we ought to abandon the search for one universal and single standard for the qualification of works of art. It is important to note that Appiah is not advocating full-scale relativism that would rob art of its transcendent values as some cultural philistines advocate nowadays. What he is criticizing is the presumption and the hubris that only the Western artist, beginning with the Romantics so romanticized by Hegel’s theory of art, is a self-conscious creator. In the process Appiah is also challenging the view that art gives us access to a genuine otherness; for indeed all of us have something in common with everybody else: our humanity. Back to the future of Italian Humanism?