By Varadaraja Raman on April 2, 2008 in Book_Review 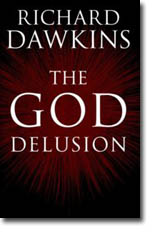 Richard Dawkins is the enfant terrible who, in book after book, has been presenting his case against the Almighty. He has been doing this with such clarity, scientific support, and erudition that theists are hard put to answer him. Dawkins is a hard-core scientist, a biologist of the first rank who has trodden the path which explores how all of life can be reduced to genes and memes and information bytes.

He is also a prolific polemicist. In his anti-religion tirades, he is incensed as much by the harm and hurt wrought in the name religion, as from the logically inconsistent and empirically unverifiable claims of the God thesis.

Plato is said to have remarked, “He is a wise man who invented God.” Others have described God as the grandest creation of the human mind. In this recent bookDawkins brushes off the notion of God less charitably as a mere delusion. Dawkins devotes more than 350 pages to elaborate on his thesis. He argues that religions are extensions of childhood fantasies for protective parents even in adult life.

Like his other books, this too is incisive in its arguments, interesting and enjoyable to read, though here and there the language is less dignified than his customary prose. The book parades a litany of absurdities in traditional religious beliefs, and disposes of proofs for God summarily, and in ways that should make any atheist feel triumphant. Some meticulous philosophers might find his disproof of the traditional proofs not quite flawless. Dawkins’ goal is to dismantle the framework in which God becomes plausible, while illustrating how religions have led to war, bigotry and child-abuse.

I will confess that I resonate with many of the points that Dawkins makes. And yet, I have wondered why a clear thinker like Dawkins should engage in such harsh mud-slinging against what he dislikes. Perhaps we can get some idea of why he (and others like him) is so vehement about God and religion when we consider the matter in more general terms. People engage in virulent attacks, whether on belief-systems, on political opponents, on governments, or even on personal enemies, under two kinds of stress: moral outrage or feelings of being victimized. They also become very harsh when they feel that the opponent is either winning or seems invincible. Many atheists experience a moral outrage, and also feel that religions seem to be winning in the culture war between science and religion, if not in arguments, at least in numbers. Under these conditions, one may become violent with words or with bloody deeds. Intentionally hurtful words and deeds are usually justified on the grounds that their targets embody all that is wrong and evil and dangerous to society.

Ardent true-believers as well as true-unbelievers tend to be unaware of, or choose to ignore, anything positive in their adversaries. Indeed, this is the ultimate cause of any conflict that seems irreconcilable. The goal of physical or verbal violence is to destroy one’s enemy. If this is not achieved, one hopes to have at least some reformatory impact on them. Those who choose this path sometimes become indiscriminate in their attacks. Unfortunately, this is what seems to be happening frequently to the rational scientist Dawkins when he talks about religion or God. Even in the midst of valid and clever reasoning, he questions the honesty of Stephen Jay Gould and the integrity of those who accept the Templeton Award for their work on science-religion dialogues.

In his Dawkins’ God: genes, memes, and the meaning of life, Alister McGrath, analyzes Dawkins’ books and theses in depth and with sympathy. He tries to rebut some of Dawkins’ excessive and unwarranted criticisms of traditional religions, and to show that religion and science have not been as antagonistic in Western culture as Dawkins et al. contend: a somewhat questionable thesis. He pleads with Dawkins to join the ranks of those who are trying to build bridges between the two. It is unlikely that Dawkins and his followers and emulators will abandon genes and memes, and embrace God and religion on the basis of such appeals. The simple truth is that one can never confirm God’s existence through arguments, just as one cannot establish His non-existence through experiments. That confirmation of Divinity does not occur in the head, as its non-confirmation cannot occur in the laboratory.

In a world where religious fundamentalism in various strains is playing havoc, with potential for even more in various religious traditions, books like the God Delusion may serve as an antidote to the other extreme. It is unfortunate that at a time when what we need is greater peace and understanding,only extreme positions seem satisfactory for a great many people. Meaningful and mutually respectful compromises seem beyond their grasp.

It is unlikely that in the foreseeable future either theists or atheists will win in the age-old game of God-proof and God-disproof. But Dawkins’ works on the debates will last as a worthy element in humanity’s cultural history.