A Review of A Republic of Mind and Spirit: A Cultural History of American Metaphysical Religion by Catherine L. Albanese, New Haven: Yale University Press, 2008, 640 pp., $22.50.

A Review of A Republic of Mind and Spirit: A Cultural History of American Metaphysical Religion by Catherine L. Albanese, New Haven: Yale University Press, 2008, 640 pp., $22.50. 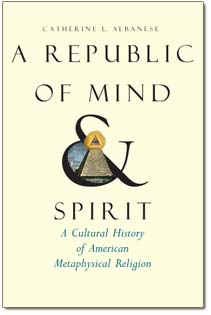 For most Americans (and for the vast majority of people across the world), religious affiliation plays a significant role in both self definition and social networks. Adherence to a particular faith presupposes commitment to a shared set of beliefs, rituals, values and morals, and frequently, allegiance to like-minded co-religionists. Such commitments and allegiances have implications for individual and collective behavior, and ultimately, for social norms, political policy, even economic practices. In a pluralist society, where nationalisms and other secular ideologies can be understood as religion-alternatives, people have numerous social and spiritual offerings to choose from. This has certainly been the case throughout U.S. history, and it continues to be so.

The religious landscape in the U.S. is exceptionally diverse. The majority of Americans (78%) identify as Christians. However, there is significant variation within this designation. Of those who identify as Christian, 24% are subcategorized as Roman Catholic, 26% as Evangelicals, 18% as Mainline Protestants, with some meshing and overlap between the latter two, as well as there being many members of a number of other Christian denominations. There are also Jews (1.7%), Buddhists (.7%), Muslims (.6%), and Hindus (.4%) among others.1 Practitioners of metaphysical religion constitute a third, broad category of belief and action. These are individuals with seemingly disparate beliefs and practices, who are nonetheless united by a similar, overarching cosmology. This diverse group is the subject of Catherine Albanese’s fine book, A Republic of Mind and Spirit: A Cultural History of American Metaphysical Religion. Albanese tells the story of a distinct brand of metaphysical religion that developed over the course of American history, intricately tracing its multiple manifestations and its variegated origins in the religious ideas and practices of early Greek, English and European, African, Native American and, later, Asian cultures. In addition to identifying the early beginnings of metaphysical movements, and its gradual accretions, Albanese shows the dynamic ways that different strains, ideas and influences have combined to create hybrid forms.

Through Albanese’s detailed description, it becomes clear that metaphysical ideas and their expression have pervaded popular culture throughout American history. This was particularly evident during the mid-nineteenth century, a time of tremendous social change and political upheaval in which movements for abolition and women’s emancipation coincided with major scientific and technological advances, industrialization, demographic shifts and the deeply fractionalizing Civil War. In the midst of this, many metaphysical ideas fomented and spread, including Transcendentalism, harmonialism, and phrenomagnetism, and later in the century, Theosophy, Christian Science and New Thought. A century and a half later, a modern wave of metaphysical religiosity has achieved wide currency in the general population, thanks to the interest of a number of media personalities. The current popularity of metaphysical ideas shows no sign of abating.

As Albanese effectively demonstrates, metaphysics is “a normal, recurring, and pervasive feature” of the American spiritual scene. Her convincingly-argued thesis is that, alongside Protestant Evangelicalism and mainstream Christian denominational forms, metaphysical religion has been a major contributor to both the tenor and content of national religiosity and culture in the U.S. Albanese’s historical account is thorough and well-documented, and it provides a helpful historical context for the current resurgence of metaphysical ideas in the U.S. and in other parts of the world.

I was drawn to this book because a number of people very dear to me are deeply invested in what I would previously have described as New Age ideas and practices. Through them I have learned about “dowsing” (seeking answers from the greater universe using an indicator tool, like a pendulum) for guidance in daily plans and life goals. I have seen them read meaning in chance meetings and occurrences, insisting that they contain messages about their lives, current dilemmas and ultimate destinies. Some turn to “channeled” material: information from wise, benevolent, unseen beings delivered through receptive or clairvoyant individuals while in trance states. They listen for clues to the purpose and meaning of humanity and the universe. Some talk of a “higher self” and/or a collective (universal) consciousness that is cognizant of our (each individual’s) deeper goals (of spiritual enlightenment and progress), and interested in aiding each of us to discern our own unique pathways toward that goal. Some have faith in “energetic healing” to remedy our ills, both physical and existential. Some believe we can “manifest,” that is, bring about material and spiritual rewards in our lives by the power of our minds. Some, rejecting evolutionary explanations of human origins, name alien forms from distant galaxies as our forebearers.

Reading Catherine Albanese’s A Republic of Mind and Spirit gave me a language and broader construct for understanding what I now see are clear themes that connect these variegated practices, rituals and creeds. Albanese, as she clarifies in her introduction, takes metaphysics “to stand for an American religious mentality (thought, belief, emotional commitment, symbolic and moral behavior) organized in terms of an identifiable set of themes” (13). These commonalities include a predisposition toward the ancient theory of correspondence (a connection and likeness between the macrocosm and microcosm, the universe and the individual); an abiding belief in the power of the mind (to heal, to attract good things to oneself, to affect worldly events through one’s intentions); an understanding of the mind and universe as functioning through energy and flow; and finally, a goal of physical salvation. Salvation is understood as a healing or restoration of harmony within the individual, and between the individual (or, in some readings, between society) and the greater cosmos. The result, it is believed, is one standing, unobstructed, in the free flow of spirit energy.

There is something deeply gratifying about gaining a broader perspective on a phenomenon that is of both personal and academic interest. Reading A Republic of Mind and Spirit was like taking a ride on a delightful history roller coaster at an educational amusement park (if that can be imagined). As I moved through the text, I found myself enlivened by what I learned: that Greek and Egyptian Hermetic literature had a palpable and lasting influence on European culture and its offshoots (like the U.S.); that early Mormonism was heavily influenced by the beliefs and practices of both Freemasonry and Old Country folk magic; that Unitarianism and Universalists contributed to the rise of moral philosophy; that s�ance spiritualism was, at least by some estimates of the number of participants, wildly popular and widespread in the 1800s (estimates range broadly from one to eleven million, in a total population of roughly twenty-eight million).

I discovered that Shaker spiritualism “offered an early harbinger for the visibility, in American metaphysical religion generally, of feminized spiritual teaching, and the actual leadership role of women” (186). In fact, as has been pointed out elsewhere (Hackett 2003), rejection of conventional gender roles and conventional religious beliefs often go hand in hand. A large proportion of the leaders and religious innovators Albanese describes (Mary Baker Eddy, Ann Lee, Helena Blavatsky) are women.

As I read further, I came to understand the ways that ideas of mesmerism, magnetism, spiritualism and harmonialism were linked to, and expressions of, widespread hopes at the time for social (and spiritual) progress and enlightenment. Ideas were freely borrowed, combined and exchanged toward this end. American s�ance spirituality, for example, became connected to the theological ideas of Quakers which posited a grand connection between inner light and truth, and outer actions toward societal reform. As each new development and form emerged within metaphysics, it reflected and built on earlier manifestations. This “combinativeness,” as Albanese terms it, extended to and incorporated trends and ideas in science, politics, literature and mainstream religion.

It turns out that this cross-fertilization of ideas occurred not only within and across metaphysical religions, but “jumped” categorical boundaries to include religious groups in broader society. Pentecostalism, for example, a religious movement which originated at the beginning of the 20th century, shares likenesses with mainstream denominational Christianity (in its commitment to old ecclesiastical structures), evangelicalism (in its encouragement of individual spiritual experience and expression, particularly during the second, “charismatic” wave of the movement), and metaphysics (in its “third wave” focus on faith healing, and more generally on the idea of a fluid, holy force—the Holy Spirit—that enters the body). The phenomenon of mesmerism provides a further example of the combinativeness of religious, social and (pseudo)scientific trends. The movement began with Franz Mesmer, a visionary 18th-century physician, who believed that bodily cures could be effected by exposure to “magnetic powers,” initially through magnetized water, cables or other instruments, and later channeled directly through Mesmer.

As a cultural anthropologist I am interested in, among other things, ways that ideas and practices in the social and political milieu infuse and precipitate religious movements and revitalizations, both in the United States and across the world. I am curious to know whether upsurges of interest in metaphysical religion correspond with particular periods in social, economic and political history. In other words, have the trends of belief and practice in the U.S. been explicitly charted against political upheavals or periods of social and economic change? How does the size and strength of the current “New Age” phenomenon compare with (p)resurgences within American history? These are perhaps beyond the already formidable scope of the Albanese’s book, but they are questions that I would be eager to see addressed.

Another area in which my curiosity was piqued but not quenched involves questions about what draws individuals to metaphysical religion as opposed to, say, a more mainstream religious identity and practice. What attracts any individual to a particular cosmology and creed? My own research examines the motivation and experiences of women who are participants (and in some cases, informal leaders) in a grassroots Islamic piety movement in Cairo, Egypt. The trajectories of individual women’s lives are of specific interest to me because they can offer perspectives on this topic. Questions about motivation, though difficult to answer given the multiplicity and complexity of factors involved, are nonetheless important. As we delve into the psychology and sociology of the individual circumstance, and factor in historical, political and economic context, we are more able to provide what Clifford Geertz (1973) termed a “thick description” of the phenomenon. Such an exercise lends itself to deeper understanding. Since we humans have a nominally useful, but frequently nasty, tendency to create categories that divide and separate people from ourselves, and which make these “others” appear incomprehensible and frightening, efforts to comprehend and re-humanize our fellows are always important.

There are at least two ways to answer questions about what lay behind the current metaphysical religious movement and its growing popularity in the U.S. One way is to reach back into the genealogy and evolution of the phenomenon, charting the cultural influences, the imported habits of belief and worship from abroad, the homegrown spiritual traditions, and the sometimes flamboyant and charismatic personalities that led and innovated within the new metaphysical landscape. Albanese does this beautifully. It is left to subsequent authors to interrogate this brand of religious expression from a psychological and sociological perspective, that is, to examine the motivations of individuals and analyze their influence on broader society. For its part, A Republic of Mind and Spirit offers a rich history of a diverse, religious movement, and a thoroughly enjoyable read.