Review of The Spiritual Brain

Review of The Spiritual Brain
September 2, 2008

Review of The Spiritual Brain

By Varadaraja Raman on September 2, 2008 in Book_Review 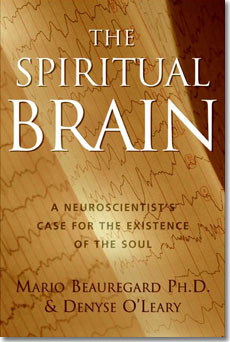 Mario Beauregard and Denyse O’Leary, The Spiritual Brain: A neuroscientist’s case for the existence of the soul.  New York: Harper One, 2007. 384 pages, $25.95.

This book explores an ancient debate in a modern framework. The debate can be framed in a few questions: Is there or is there not more to human beings that matter and energy, than molecules and metabolism? Are we or are we not endowed, as most religions tell us, with a non-material aspect, called soul or spirit or by some other name? And what about spiritual experiences? Are these for real, or are they simply non-normal modes of brain activity? Is the mystic in a heightened state of awareness or is she/he just hallucinating? Is there more to consciousness than the highly complex network of zillions of neurons firing away in the frontal lobe, or is it the result of some kind of a resonance with something out there in the universe?

Over the ages these questions have been, to use a crude phrase, beaten to death by philosophers, skeptics, yogis, myth-makers, scholars, theologians, and scientists alike. But perhaps “beaten to death” is inappropriate here since the issues continue to be very much alive. If anything, they are taking on fresh energy and momentum, even as traditional religions are making a grand come-back all over the world.

There are several reasons for this. First, the still growing surge of the rationalist-scientific framework is calling certain religious truths into question while attempting to exile God from human culture. At the same time, the materialist stance on human life retains the potential for trivializing moral values and human worth. Then again, science itself has become far more complex and sophisticated now than in the 18th and 19th centuries when the grand achievements of celestial mechanics and electromagnetism made people assert with more confidence than now that there is nothing beyond matter and energy in the world. Finally, we have now come to understand the brain and biochemistry much better. Just as our knowledge of quantum mechanics revealed to us aspects of the physical world never before imagined, it is entirely possible that a deeper knowledge of neurons and their properties might reveal aspects of thought and spirit that seem as yet to be only emergent properties of the brain.

But on this issue there is a great divide. Most neuroscientists, cognitive scientists, and biologists cling on to the traditional scientific view that all talk of soul and thought of God are merely sparks from the complex brain, like so many fantasies and fairy tales which emerge from the same brain: all interesting, but just that, and not revelations of hidden dimensions of physical reality. As they see it, soul and spirit are sprouts from the same fertile soil that the brain is, and not subtle silent entities embedded therein. It is only a matter of time, they say, before we account for the perennial propensity of the brain to engage in God-talk.

There are serious thinkers, and among them some scientists too, who are not persuaded. They are convinced that there is more to the mind than macromolecules, more to mysticism than muddled thinking. They are convinced that the brains of mystics experience an aspect of the world that ordinary brains just let go unobserved. They work on the conviction that the spiritual dimension is somewhat like the Pluto (whether planet or not) of pre-telescopic astronomy. It has always been there, but one not equipped with the appropriate mode of detection (spiritual outlook and discipline) simply cannot know about it. One of the authors has had a profound spiritual experience himself. It is the inner certitude derived from it that that has fueled much of the book.

It is from this approach that Beauregard and his co-author undertook their probe into the spiritual life of Carmelite nuns who were initially suspicious of their motives. After considerable systematic study of their mystical modes, the authors felt they had amassed considerable empirical evidence for the objectivity of something beyond matter and radiation in the physical world. There is, they contend, such a thing as spiritual reality. Needless to say, their conclusion only bears out their initial conviction, and this may be one criticism of their work. But then, one could say the same about a skeptical inquirer who goes on to investigate the claims of a yogi who connects with the transcendent principle. No matter what the evidence or lack thereof, we may be sure what the skeptic himself will declare at the end of the well-funded project. In this matter, there are few open-minded inquirers.

This book is particularly interesting because it is by a practicing neuroscientist who has dared to go against the current of accepted wisdom. It is not easy to swim contrary to well-established scientific theories, but it is virtually impossible to uproot its most fundamental doctrine: namely, that every aspect of the experienced world can ultimately be interpreted in terms of matter-energy transformations in accordance with the inviolable principles of physics and chemistry. In trying to challenge this view, whose appeal is more because of its proven power and fruitfulness than because of the often alleged closed-mindedness on the part of its practitioners, the authors sprinkle the book with numerous interesting quotes from mainstream authorities, often commenting on them in appropriate and critical ways. Thus, the thesis of the book is not developed in a vacuum, but in the context of the tide that is working against it. And the authors present to the reader persuasive arguments as to why the materialist paradigm currently accepted by the scientific establishment is inadequate in many respects. Moreover, they suggest that at the present precarious state of human civilization, a universal spiritual outlook, based on the best religious traditions of humankind, will be both helpful and necessary.

So, the neutral observer who may also have read Dennett and Pinker, may wonder: Whose finding or thesis am I to trust on this matter? Perhaps the answer would be that when it comes to spiritual matters, it is not whom we trust but what we experience ourselves. This is what makes scientific rejection of spirituality as untenable as scientific confirmation. The human brain often accepts or rejects propositions relating to spirituality, depending on how it has been molded by prior religious, cultural, and scientific inputs. It may be convinced by any or it may resist all arguments on either side of the issue.

The subtitle of the book is unfortunately misleading, however, for two reasons: First, there is no universally accepted meaning or definition of soul. Second, the book does not provide any final evidence for the existence of the soul. However, it does give ample persuasive reasons for accepting the idea that there could well be something more than our body and brain to us humans. What that something is, is not yet quite clear. It could well be that the soul, as conceived and affirmed by some religions through religious pronouncements on the post-mortem trajectory of the soul, have not thus far been (nor are ever likely to be) confirmed by any neuroscience.

With all that, for those who wish to see a not so widely known view on the matter, and certainly for a less popular perspective among scientists, this is a valuable book. It is extensive in its scope and authoritative in its contents. It is rich in citations and insightful in its comments. It has more science than speculation, and more argument than assertion.