By Eduardo Cruz on December 4, 2009 in Book_Review 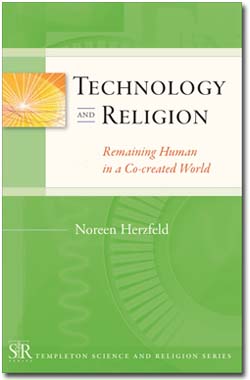 This is the third volume just issued in the new Templeton Science and Religion Series of Templeton Press. It is part of the ever-growing body of works on the relationship between religion and technology, and should be welcomed as a fine addition to this body. The author, Noreen Herzfeld, is uniquely qualified for the task, being a professor of theology and computer science at St. John’s University, Minnesota. She has also published extensively in the subject, including her 2002 work, In Our Image: Artificial Intelligence and the Human Spirit (Fortress Press).

Technology and Religion is the result of a series of lectures delivered in Sarajevo, both in Christian and Islamic contexts. For better and for worse, this lecture style is reflected in the prose. The work has four chapters, one introductory and the others presenting four major issues in the contemporary relationship between technology and religion: medical technology, cybertechnology, technology of matter, and globalization. Herzfeld examines each area with reference to how it impacts human nature and the human condition.

In the first chapter, “Of Morals and Machines,” Herzfeld discusses the notion of technology as related to agency, as something that is much more than a simple collection of tools and techniques. She then relates technology to the doctrine of Creation and to human creativity in relation to God, to other human beings and to Nature. She does this by relying on Gerhard Von Rad’s reading of the first chapters of Genesis, and on Karl Barth’s reading of Creation in a Trinitarian fashion, emphasizing the notion of relationship. As she warns us: “Dominion without a relationship to God, to one another, and to the rest of creation, can produce unforeseen and disastrous results” (15). She finally describes the attitude of the Amish who, when considering whether or not to appropriate new technologies, employ the following criteria: “Does the technology [in question] provide tangible benefits to the community or individuals within that community?”; “Does the technology change the relationship of the individual to the community?”; and finally, “Does the technology change the nature of the community itself?” (18). In the chapters that follow, she translates these criteria (especially the last one) in terms of the religious responses to contemporary technology.

The first area to be analyzed is the medical one, and hence the second chapter is titled, “Healing or Enhancing.” As is the case with all technologies, medical technologies carry a Janus face. While they are related to religious demands for salvation, they also have a hard time contending with the multiple meanings of suffering and perfection. Even though healing technologies are, for the most part, easily and widely accepted (though, as Herzfeld cautions, they are not free from ambiguity), those that have an enhancing prospect are a matter of heated debate. Following these claims, Herzfeld presents many data on genetic engineering, pharmaceutical trends, and prosthetic technologies (especially those pertaining to human enhancement). We hear about these technologies almost on a daily basis now, but it is helpful to have them presented and explained in such clear terms, as is done in this book. Contemporary religious responses to them are also discussed. Paramount among her considerations is that religious notions of the sanctity and giftedness of life have a direct impact upon ethics. As Herzfeld points out, however, life is not the ultimate good. Rather, it is subordinate to relationships among humans and between humans and God on either side of death.

Chapter 3 (“Cyberspace on Our Minds”) leads us to the new technologies of information and their widespread usage, including the notions of cyberspace and AI. Herzfeld begins the chapter by reminding us of the relational character of intelligence and of the soul (vis-�-vis the notion of information). She then proceeds to analyze several different studies on the impact of these technologies on human behavior and self-awareness and finds the new traits of “cyberculture” wanting. For example, she describes the role of videogames in our culture, especially among the youth, as marked by many de-humanizing underpinnings, like hyper-individualism and loneliness. Next, the notion (and the possibility) of immortality in cyberspace is examined and contrasted with the tradition of “new” or “eternal” life in monotheism. Herzfeld also analyzes the character of relationships in cyberspace and considers them to be rather distant from those envisioned by the monotheistic traditions, particularly as cyber-relationships are undergirded by narcissism. She then advances four ingredients of an authentic relationship in accordance with Barth’s position: face-to-face contact; actually speaking to (and hearing) another person; helping others with willingness and in the spirit of mutual assistance (that supposes inner motivation and freedom); and doing so with joy. Dr. Herzfeld ends this chapter in an optimistic mood: it is “not impossible” to transform these technologies into “unequivocal goods in our society” (90).

Chapter 4 (entitled “The New Alchemy”) moves us into yet another realm, that of technologies of matter. Among these, Dr. Herzfeld highlights three: Nanotechnology (including possible applications that would alter human nature), genetically modified (GM) foods, and energy technology. She describes at some length advances in these areas, together with concerns (backed by somewhat gloomy data) given voice in other authors’ works. Her description is punctuated by remarks from a religious perspective, but now without references to Barth. Emphasis is placed on God’s ownership of all creation—we should not use natural resources as if they were our possession, but rather see them as a kind of a loan from God.

Finally, Chapter 5 does not speak of a single technological trend, but stresses the way all new trends accompany globalization, especially (the “American way of life” included) their impact on developing countries. Dr. Herzfeld begins with the parable of the Good Samaritan as an adequate metaphor for the enlargement of our neighborhoods and for what it is needed today. Regarding this enlargement, she employs some concepts from the sociology of religion, and describes several challenges that globalization presents to religious traditions. She then moves on to a touchy subject in the Western experience of religion (but mention is also made here to Mahatma Gandhi and Seyyed H. Nasr)—that of sin. A discussion follows, entertaining new “deadly sins”, those regarding new technologies affecting relationship and responsibility on a global scale. Among her conclusions, Herzfeld states that “Religion gives us a platform from which to evaluate our technologies, a voice to call for a change in direction, if needed, and a call to contrition when we fail” (140).

Any reader can follow Herzfeld’s descriptions and evaluations with ease and no vanishing interest. Raw data are deftly weaved into original and tightly knit arguments—this book is not a compilation of ideas from secondary sources, but a good argument of her own crafting. Hard data and logical reasoning, moreover, are intertwined with personal stories and insightful quotations, and that makes the reading even more agreeable.

Nevertheless, as one hat does not fit all, this book may not satisfy all readers. Theological readers, for example, may find the conclusions wanting. First, they may be curious why her previous book, In Our Image1 is not used as a basis for the evaluation of technology in this work. Indeed, some ideas in the new book (like that of relationships) are better developed in the earlier work. Technology and Religion does refer to the Amish, to Reinhold Niebuhr and to Karl Barth, alongside Jewish and Islamic scholars. However, there is a lack of a Conclusion where these theological ideas can be put to bear on the ethical and social issues in an explicit way, and the reader might wonder where the “giftedness of life” fits in. Perhaps a clear distinction between ethics and religion would help. Moreover, the reiterated reference to Jacques Ellul as an analyst of technology may bring concern about the somewhat holistic and relentless criticism of this author, indicated by several of his commentators.

One could engage in an exercise, and ask whether these questions by the author herself were properly addressed. They are: “Who are the creative creatures fashioned in the image of a creator God? How can we best channel our creativity in order to serve God and our neighbor and to exercise responsible dominion over nature? What are our responsibilities in a rapidly globalizing world?” (viii). Again, for the lack of a Conclusion, any assessment would not do justice to the book. In my tentative estimation, the last question (basically an ethical one) was the one best grappled with, considering Herzfeld’s extensive analysis of new technologies and the ethical issues they have raised. The second question, more in the line of a practical theology, has some very interesting leads (like the criteria of the Amish for the acceptance of new technologies and Karl Barth’s views on the proper relationship with our neighbors and, mutatis mutandis with nature), but they do not appear to be properly followed. The first question is, in my estimation, not adequately attended to. The Imago Dei and Imago Hominis are well treated in her previous book but, as was mentioned, this discussion was not recovered in the present one. The nature of the created co-creator is suggested in several different places (especially in the first chapter), but the author does not wrap up her argument about it.

Perhaps a discussion, even a brief one, of other authors that have recently dealt with technology and religion (one may recall George Pattison, Susan George, Bronislaw Szerszynski, Philip Hefner, and others) would also help. It is true that it is the author’s choice that rules, yet the reader still lacks a scholarly work that engage these authors in a comparative task.

Herzfeld’s constant reference to “developing countries” may also bring some distress. First, this expression was first used in the context of the UN’s full endorsement, after WWII, of scientific and technological progress as a means to give poorer countries a place in the concert of nations. Second, application of a specific technology may cause much harm in one developing nation while bringing much benefit to another—differences should be highlighted. Third, perhaps the argument could be more cogent if religious leaders and analysts of technology in these countries were consulted.

None of these remarks, however, are meant to discourage any readership. Quite to the contrary, they are meant to foster further discussion in such an important area, and this book is certainly a sound basis for that endeavor. Not only may we learn a lot from this book about new technologies that have a major impact on our lives, we will also become aware of the many contemporary religious responses to them. Herzfeld’s book is recommended reading, both for the specialist and for the novice.