Teilhard for Beginners: A Review of Louis Savary’s The Divine Milieu Explained

Teilhard for Beginners: A Review of Louis Savary’s The Divine Milieu Explained
April 2, 2009

Teilhard for Beginners: A Review of Louis Savary’s The Divine Milieu Explained 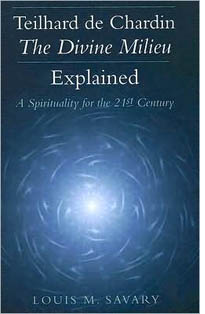 The spirituality of Teilhard de Chardin is a spirituality for today—broad enough to incorporate cosmic and biological evolution and deep enough to provide access to the very atmosphere of God. It is a spirituality born out of his deep prayer and his effort to make sense of the Mystery of Christ in light of the theory of evolution. Many people shy away from reading his work, however, because the language that he uses—and sometimes even creates—seems difficult to understand. Again, some of the English translations from the original French are not completely accurate. However, many of those who do read Teilhard, even when they fail to understand his words completely, are mesmerized by his poetic language and by the novelty of his synthesis. What we need are spiritual mentors to guide us through these works and to make them practical for today’s seeker.

This is exactly what Louis Savary is doing in his latest book, Teilhard de Chardin: The Divine Milieu Explained: A Spirituality for the 21st Century. Winner of the 2008 Catholic Press Association award for the best soft cover book in Spirituality, this book is a must-read for anyone who would begin to understand Teilhard’s spirituality. The Divine Milieu Explained grew out of Savary’s own experience of facilitating workshops and study groups on Teilhard’s thought and spirituality. Thus he is familiar with the difficulties that new readers of Teilhard experience.

In this book, Savary follows the text of The Divine Milieu (“the divine Medium,” Teilhards’s revolutionary book of Christian spirituality written 1926-27) line by line. He works carefully through each page explaining unfamiliar language, providing useful down-to-earth examples of what each section might mean in today’s world as well as simple stories that ground the text. To help the reader acquire a deeper sense of Teilhard’s spirituality, Savary also suggests ways of praying with Teilhard. Short spiritual exercises and discussion questions interspersed throughout allow the reader to deepen the insights gained. These exercises and questions would be particularly useful if the book were used by a study group. Another feature that enhances the text is the boxed-off areas containing background material in the form of diagrams, definitions of Teilhard’s esoteric terminology, and quotations from scripture and other relevant sources. While reading Savary’s book, however, it is important to have a copy of The Divine Milieu at hand so that Teilhard’s poetic presentation, an integral component of Teilhard’s message, is not lost.

Savary’s familiarity with Jesuit spirituality, and in particular with the Exercises of St. Ignatius, gives him special insight into the dynamic behind Teilhard’s spirituality. The culminating experience of the Exercises, the Contemplation to Obtain God’s Love, serves as the focal point of Teilhard’s The Divine Milieu and as the motivating factor for full participation with Christ in the transformation of the world. It is this grace of finding God present in all things—in our diminishments as well as in our activities, in our sorrows as well as in our joys—and this deep engagement in the work of Christ who is transforming the world that Teilhard experienced so deeply and understood so well. In The Divine Milieu Explained, Savary helps us to comprehend Teilhard’s experience of the divine milieu, assuring us that the mystical life is possible not only for trained mystics but for ordinary people as well.