There’s a new mind theory out there. Its big and ambitious, a bridge between biology and psychology that, to quote a recent New York Times piece, “provides psychiatry with perhaps its grandest working theory since Freud.” It’s called the Imprinted Brain, and it comes to us via Bernard Crespi, a biologist at Simon Fraser University in Vancouver, and Christopher Badcock, a sociologist at the London School of Economics.

The theory is worth paying attention to because, well, it’s about you. Or at least two of you: the careful, analytic you, and your misguided shadow, who spends altogether too much time in the “wrong” section of the bookstore. One of you is a Mechanist. The other is a Mentalist. Though you may not realize it, you are two tribes on opposing sides of a battle that began in utero. 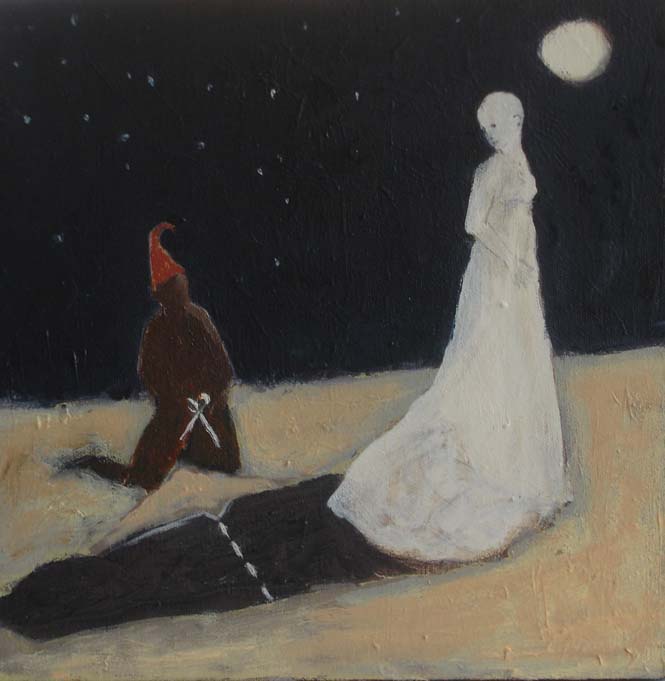 Your parents have sex; you fuse into being. Half your genes come from Dad’s sperm, the other half from Mom’s egg. Well it turns out that some of these genes—in particular some of the genes responsible for brain development—are not neutral. Rather, they’ve been “imprinted” ahead of time by Mom or Dad’s self-interest. They’ve been corrupted—biased, epigenetically-primed—to favor, in your coming life, the survival of either Dad’s or Mom’s genes.

So, the theory goes, genes imprinted by Mom lead to babies that are easier for Mom to handle. They’re smaller at birth, less behaviorally demanding, more “attuned to interpreting and understanding the mental states of others,” in the words of Badcock and Crespi. These babies become kids who like to finger paint, talk about their feelings, and help with the dishes.

Dad’s imprinted genes, on the other hand, give rise to babies that are generally bigger at birth. Large babies are more robust—they live longer and are more resistant to disease. In this sense, they favor father’s genes at no cost to father himself. The cost, rather, goes to Mom. Big babies require more energy to suckle and nurture. But that’s only one part of it. Because it turns out these father-imprinted babies have other conspicuous traits: they are more behaviorally demanding, and possess a cognitive style more attuned to understanding and manipulating the physical state of the world. These babies become kids who tear around the backyard with no pants on, poking frogs with sticks, and conducting experiments on the family cat.

In other words, certain key brain development genes seem to favour “thing” people, while others favor “people” people. In psych-speak, there is a cognitive continuum with more “mechanistic” thinking at one end—a preoccupation with the external physical environment—and more “mentalistic” thinking—a preoccupation with the internal mental environment—at the other. Mechanist and Mentalist.

One reason that so many researchers are excited is that the theory seems to provide the beginnings of a comprehensive explanation for psychiatric and developmental brain disorders. Badcock and Crespi theorize that if you get an overly unbalanced portion of either set of genes, you run the risk of mechanistic or mentalistic derangement. On the mechanistic side, we get autism. These souls are all mechanism. They often have a genius for interpreting the world of objects, but when it comes to interpreting the world of people—intention, emotion, motivation—they’re at a loss. They suffer from what psychologist Simon Baren-Cohen calls “mindblindness.”

On the mentalistic side, we get psychosis, a suite of disorders which include schizophrenia, bipolar disorder and major depression. Here it’s the opposite problem: an excess of mentalism. Extreme mentalists experience mind everywhere—they hear voices, they suffer delusions of conspiracy. Where the autistic famously avoids other people’s gaze, the psychotic imagines he is constantly being watched. Where the autistic has a muted or underdeveloped sense of self, the psychotic is a megalomaniac with delusions of grandeur.

Fig 1 . Mechanistic vs Mentalistic cognition (from Crespi & Badcock, “Psychosis and autism as diametrical disorders of the social brain,” Behavioral And Brain Sciences (2008) 31, 257)

The Mechanist and the Mentalist provide a compelling picture of the extremes of the human mind. But here I’d like to move from Crespi and Bascock’s theory into a larger debate, for it seems to me that these two cognitive styles also inform Big Picture discussions over the nature of reality itself, and particularly about the relationship between mind and world.

The mechanistic side is the most familiar to us, because it is the dominant scientific narrative: we live primarily in a world of matter, one that can be objectively observed and tested using the experimental method. It is a world of great mechanical and organic beauty, a squishy clockwork of physical and biological laws that operates quite independently of our knowing about it. Though the human mind can of course observe the world—and in a local way affect great change within it—we are not yoked in any meaningful way to the larger physical and biological processes that surround us. Whatever meaning life may have is ours to create.

But there is also a mentalist side, familiar to spiritual practitioners, some religious believers, and a section of the population that can be broadly described as “New Age.” The mentalist view is, by its nature, a little trickier to pin down, but in its broadest form it sees mind at play in the world, of being a direct part of an animate universe. In the past this view sat comfortably within religious and animistic views of a living cosmos, but the latest fashion among the New Age camp has been to try and describe it using the language of science itself. So, they argue, our interior subjective world interfaces in some direct way with the external objective one (although the nature of this interaction is unstable and contradictory and generally a pain in the ass to quantify experimentally). Some argue that it happens via a vaguely-defined energetic field in which the word “quantum” has a prominent explanatory role. Others suggest that the matrix of time, space and matter is really a huge multi-dimensional hologram produced by the cosmic unconscious. Whatever the descriptive vocabulary, at root is the belief that mind is a fundamental—if not the fundamental—property of the universe.

Although this mentalist view is marginal from the perspective of mainstream science, it seems to be growing in influence and popularity, and not just with viewers of What the Bleep do We Know? In fact I’d even argue that the conflict between Mechanists and Mentalists is the real culture war, one that covers a wider area than the science versus religion debates that have been garnering so much attention lately.

Here are some of the ways the war plays itself out beyond the familiar conflict between atheist and believer. In medicine, you have the conventional versus alternative divide—the former with its unencumbered physical body, the latter with its esoteric energy-body-mind interactions. Within consciousness studies you have the hard-core materialists—who argue that everything is matter, and mind at best a “folk fiction”—versus the panpsychists, who argue that all matter has the capacity for mind. In anthropology it’s the sober social scientists versus the Carlos Casteneda school of peyote-powered reality surfing. In ecology it’s orthodox biologists versus noosphere-obsessed Gaians. In physics it’s practical engineers versus disorderly quantum theorists. The list goes on. The common feature in all of these skirmishes is a fundamental disagreement over the relationship between the mind and the world.

Now, we simply don’t know enough about existence to know which of these broad paradigms is right. Perhaps both—or neither. Personally I’m an agnostic. I love Mechanistic science – its collegial transparency and ordered predictability (the scientist, too, has a kind of prayer: ‘repeat this thing for me that I may know it’) – and I can understand the appeal of being an obedient journalist, reporting the latest Mechanist consolidations and writing cranky dismissals of homeopathy. Except … I love and respect the Mentalist view too. At the fierce psychosis-saturated end of the continuum it may be terrifying—think Ezekiel and the wrath of God, or the reality-shattering visions of Philip K. Dick. But it has a softer expression too: a deep life-affirming sense of connectedness. This is important. The Mentalists insist they aren’t just talking about intellectual understanding, but an experiential bond. They feel this connection, it roots them in the world and leads—by many accounts—to exceptional levels of physical and mental and spiritual health.

So what’s going on here?

The Mechanists, of course, have a theory, one that takes us all the way back around to the nature of mentalistic cognition. You can read about it in a recent issue of the neuroscience journal Cortex, which is devoted entirely to the “paranormal mind.” The paranormal mind, write guest editors Peter Brugger and Christine Mohr, has an experimentally-proven propensity for finding meaning in coincidence and random noise. Once called “magical thinking,” the latest clinical term for this is “apophenia.”

Now, to take the Mechanist view for a moment, these are experimentally real results. You put a bunch of Mentalists in front of a set of randomly moving triangles on a computer screen and they are more likely to see some ordering logic or intent that isn’t there. So much for astrology (the triangles have message!) and religious belief (the triangles have mind!), says the Mechanist. Thus the numinous center of much of spiritual life is comfortably explained away, and the Mentalist herself is deposited into a neat (object-like) category.

Except the Mentalists don’t seem to notice. They have their own books and schools and journals, their own experiences. They hum along behind the triangles, plugged into a divergent narrative. If they acknowledge their “errors” at all it is only to remark that these are surface symptoms of a deeper openness the Mechanists, with their “objective” tools, cannot—or will not—see.

Two tribes; one continuum. One side looks out, the other looks in. And behind each are the long shadows of the autistic and the psychotic, sculpted—in part—by a few pivotal genes, living in two different worlds that may just be of their own making.

Fig 2. What do we miss when we look objectively in and subjectively out?