Urizen Struggling in the Waters of Materialism

Urizen Struggling in the Waters of Materialism
September 26, 2011

Urizen Struggling in the Waters of Materialism

By the Editor on September 26, 2011 in Visual-Explorations

“The First Book of Urizen, as its title suggests, can be seen as the first book of Blake’s “Infernal Bible”. In it he offers an alternative view of creation in a rewriting of the biblical Book of Genesis. According to this view, creation itself needs to be seen as an evil act because it follows from a command; it is the despotism of the god of reason and law, Urizen, that has called the world into being, and this is why it has automatically assumed a fallen form. In the poem, Urizen, having created the fallen world, is then drawn down into it himself, finding himself bafflingly and chaotically embroiled in his own nets and webs. The god Los, standing for the imaginative power, has been set to watch over Urizen, but instead he too gets drawn into the general collapse.”

From David Punter, University of Stirling. “The Book of Urizen.” The Literary Encyclopedia. 17 Jul. 2001. The Literary Dictionary Company. 14 March 2007.

The Dance of Albion 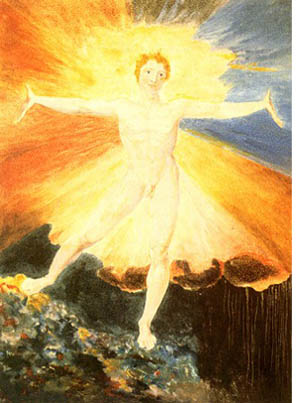 The Dance of Albion Etching and watercolor, 1794