What Jesus Did: The Incarnation as a More Radical Hermeneutics
February 7, 2008 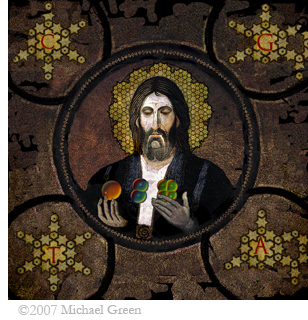 Since I’m already clearly on record1 as a friend and fan of John Caputo’s winsome 21st-century rendition of Sheldon’s In His Steps, I would like to take this symposium on What Would Jesus Deconstruct? as an opportunity to push the conversation further, taking the spirit of Jack’s book seriously enough to disagree with it. I’ll do so by taking a position that is not only unpopular but will seem downright counter-intuitive to many. My claim is relatively simple: that despite all the bad press and caricatures from supposedly enlightened liberals, it is in fact orthodoxy that constitutes the most radical appreciation of “deconstructibility.” To put it a little more stridently and provocatively, I would suggest that the Jesus of Pope Benedict XVI represents a more radical hermeneutic than the Jesus we get from Schillibeeckx, that the church of Francis Cardinal George is a more radical institution than the sort of church you’d get from Gary Wills, and that the Gospel according to Stanley Hauerwas is more radical than the Gospel according to Jim Wallis. Now, to anyone who has even skimmed What Would Jesus Deconstruct?, that must seem like an indefensible claim. But let me take a shot at defending it.

I’d like to push back on this thesis a bit. First, very briefly, this is a particularly odd sort of distinction to invoke in the name of deconstruction which, from its earliest days, campaigned against unstable binaries.3 To what extent does such a vision of the kingdom function as an “original supplement?” How or why is this kingdom not akin to Rousseau’s dream of an original speech (so roundly criticized by Derrida in Of Grammatology)? What are the prospects for articulating the supposedly impossible and undeconstructible Gospel without immediately falling back into the mire of deconstructibility? And if such a Gospel eludes articulation, then are we not back to a transcendental signified (again, the subject of sustained critique in Of Grammatology)? While I don’t have space to do so here, it would be interesting to take Caputo’s What Would Jesus Deconstruct?, drop it in as a replacement to Rousseau’s Origin of Language, and then undertake the same sort of deconstructive critique to which Rousseau’s Essay was subject in Of Grammatology. Indeed, it would be interesting to take Derrida’s own “Force of Law” (clearly a key text for Caputo’s project) and subject it to the same kind of careful critique to which Derrida subjected Rousseau in 1967. Reading early Derrida against later Derrida, noting the instabilities and internal dissension within his corpus, is a way of being faithful to Derrida’s deconstruction. Subjecting Caputo’s church/kingdom distinction to the same deconstructive critique might also be more faithful to l’esprit de deconstruction than maintaining it.

Second, while justice and the kingdom are taken to be both impossible and undeconstructible, certain folks seem to have a corner on just what the undeconstructible looks like (or at least what it’s not). This usually turns out pretty similar to whatever the Democratic party is currently peddling such that what we get in the name of an indestructible Gospel doesn’t really sound all that different from the kingdoms envisioned by John Rawls or Nancy Pelosi. Jesus, it turns out, is a good liberal. And I don’t mean that just as an epithet hurled by conservatives against what they don’t like or what threatens their hold on the status quo. I mean that in quite a technical, philosophical sense: Jesus’s Gospel turns out to be a version of liberalism insofar as it is characterized by just the kind of laissez faire individualism which makes religion a (still) largely private, individual affair (was anyone more liberal than Kierkegaard?). Apart from a stated predilection for higher taxes (at least in theory4), it seems generally concerned to guard the individual from any interference from either the state or the church. The deconstructed church turns out to be a church that desperately wants you to voluntarily care for the widow, the orphan and the stranger, but promises not to interfere with your body or to press you about your voluntary almsgiving. In short, this vision of the so-called kingdom sure feels a lot like Locke or Rousseau, beginning from a (still) atomistic conception of community where the basic unit is the individual; the church (or any other community) is at best a collection of consenting adults.5 That sounds like a solidly modern gospel to me. (Indeed, just where does this deconstructive gospel ever disagree with the Declaration of Independence?) What’s never entertained here is the possibility that Jesus’ Gospel actually articulates a fundamentally communitarian and anti-liberal conception of persons and community, where the “body” (1 Cor. 12) precedes and takes precedence over the individual, and where the community specifies the shape of the good life rather than leaving it up to the whims of individual pursuits of life, liberty, and happiness. Wouldn’t that be a more radical critique of modernity? So as Stanley Hauerwas sometimes quips, the Gospel-driven church might be just the place that requires you to bring your 1040 tax return to the deacons rather than leaving your giving up to your own private, voluntary discretion. The Gospel of Jesus and the kingdom he announces looks more like the rigors (and economics) of a Cistercian abbey (which ain’t liberal!) rather than the gathering of some do-gooder “voluntary” society like MoveOn.org, where everybody pulls up in their Saabs demanding “justice now!,” slices off a donation from their six-figure salary, then retreats in self-congratulatory glee to their Marin County mansions to sip Bordeaux and congratulate themselves on not being Republicans.

The scandal of Catholic ecclesiology is that this logic of incarnation then extends to an institution, the church Catholic, which is now configured as the body of which Christ is the head. The same Spirit that inhabited and empowered the incarnate Jesus (e.g., Luke 4:1, 14, 18) is given to the ecclesial community (Acts 1:8). This continues the logic of incarnation: the undeconstructible God continues to condescend and inhabit the very deconstructible institution that is the Church. Far from being infallible or perfect, nonetheless the institution is an extension of this logic and bears within it all the resources it needs to make sense of its own failures. Indeed, two of its most significant seasons (Advent and Lent) are seasons of penitence; it gathers as a community weekly to confess its failures (when was the last time the Democrats got together to do that?!). But in contrast to the logic of purity that seems to motivate the Derridean critique of deconstructibility as itself a problem, the logic of incarnation testifies to a God who inhabits, affirms, and takes up all the messiness of a deconstructible institution. The Catholic affirmation of the institutional church is rooted in this logic of incarnation which is a continuing testimony of what Jesus did.

James K.A. Smith is Associate Professor of Philosophy at Calvin College in Grand Rapids, MI. He is the author of a number of books, including Who’s Afraid of Postmodernism? Taking Derrida, Lyotard, and Foucault to Church (Baker Academic, 2006), Jacques Derrida: Live Theory (Continuum, 2005), and Introducing Radical Orthodoxy: Mapping a Post-Secular Theology (Baker Academic, 2004). He is the editor of the Church and Postmodern Culture Series. For more on his work, visit www.calvin.edu/~jks4.

3 Granted, I think this is a problem internal to the Derridean corpus. While on the one hand I have argued for a fundamental continuity between the “early” and “later” Derrida, against claims of some sort of Heidegger-like Kehre in his thought (see James K.A. Smith, Jacques Derrida: Live Theory [London: Continuum, 2005]), I have also argued that there are important ways that the early Derrida deconstructs just these sorts of distinctions evoked by Derrida in the 1990s. See, for example, James K.A. Smith, “A Principle of Incarnation in Derrida’s (Theologische?) Jugendschriften,” Modern Theology 18 (2002): 217-230.

4 Rarely do I hear deconstructive calls for taxation on the order of, say, Canada’s graduated taxation scheme. And even more rarely does this deconstructive Gospel actually entertain the sort of socialism and abandonment of private property that was the practice of the early church (Acts 2:44-45, 4:32-5:11). In this respect, downright Victorian voices like John Ruskin and F.D. Maurice are less modern than much that traffics under the banner of “postmodern” religion.

5 Here I would commend Charles Taylor’s account of the shift effected by Locke, Grotius and Hobbes which bequeathed to us the “modern social imaginary” (in A Secular Age [Cambridge, MA: Harvard University Press, 2007], Part I). Methinks the “deconstructive gospel” can remain very comfortable within the modern social imaginary, whereas I’m suggesting that Jesus’ Gospel, taken up by the Catholic tradition, runs counter to the modern social imaginary not only in the particulars of what it envisions as “the good life,” but in how it conceives the very nature of freedom and community.

6 The other crucial difference between a Derridean gospel and the Catholic tradition is precisely the Catholic affirmation of eschatology as such (viz., that a particular instantiation of the kingdom is coming and will arrive) whereas the Derridean kingdom is always and only to come and will never arrive. Indeed, for Derrida, any arrival would only be the arrival of a new regime of injustice. But I can’t address this difference here.

8 I take this to be a rough and acceptable translation of Anselm.

9 I mean to allude here to Augustine’s notion of the “right order of love,” particularly as articulated in City of God where the discussion is most germane to our context here.